Prior to discussing the field of nuclear pharmacy, it is important to understand some background regarding radioactivity and how it is used in patients.  Most people hear the word radiation, and immediately have an image of danger or injury.  However, most people do not realize that there is radiation in everyone's lives in many different forms.  Electromagnetic radiation is emitted from the sun, from signals sent from radio and TV stations, from radar used to track airplanes, and even visible light.  In this particular field, we are interested in a type of radiation termed radionuclides.  A radionuclide is an atom that has an unstable nucleus.  Recalling chemistry, the nucleus of an atom consists of protons and neutrons.  If a nucleus, for whatever reason, has an excess of either one of these constituents, it will try to "get rid of" the excess component and return to a stable state.  By doing so, the atom is said to give off this energy in the form of radiation.  There are quite a few naturally occurring radionuclides.  Any nuclide with an atomic number greater than 83 is radioactive.  An atom's atomic number is simply the total number of protons found in the nucleus.  There are also many naturally occurring radionuclides with lower atomic numbers.

While some radionuclides occur naturally in the environment, there is another class of "man-made" or artificial radionuclides.  Artificial radionuclides are generally produced in a cyclotron or some other particle accelerator, in which we bombard a stable nucleus with specific particles (neutrons, protons, electrons or some combination of these).  By doing so, we make the nucleus of our starting material unstable, and this nucleus will then try to become stable by emitting radioactivity.

There are some inherent differences in nuclear pharmacy practice, which ultimately warranted its designation as a specialty pharmacy practice.  There are certain areas of practice unique to nuclear pharmacy, as well as a separate class of drugs that are used.  The most striking would be the fact that radioactive material is being used to create the final products.  While the quantity used is small, there are still certain precautions that must be taken into account when handling on a day to day basis.  The nuclear pharmacist is extensively trained in radiation safety and other aspects specific to the compounding and preparation of radioactive materials.

In most nuclear pharmacies, the nuclear pharmacist is responsible for obtaining the desired radioactive material, either from a manufacturer, or from an in house generator system.    The most commonly used isotope in nuclear medicine is Technetium-99m that is readily and continuously available from a generator system.  The generator forms the radionuclide that is retained on an internal column until the generator is "milked".  When "milking" the generator, sodium chloride is passed over the column, which removes the radioactive material.  The eluate is then collected in a shielded evacuated vial.  After performing quality assurance tests on the eluate, it can be used in the preparation of the final radiopharmaceutical products. 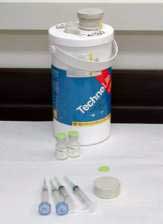 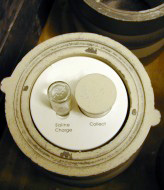 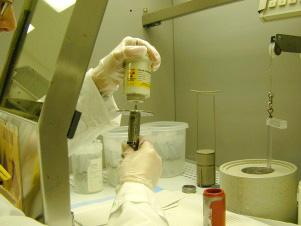 With over 100 different nuclear medicine procedures performed today, there are many different products that can be used.  Most radiopharmaceuticals are available as "kit" formulations.  All materials necessary for preparation are available in the nonradioactive kit with the exception of the radioactive isotope.  When the radioactive isotope is added to the kit, the chemical reactions required for binding the isotope occur within the vial.  In most cases, when the tagging reaction is complete, the final product will be ready for quality control verification and unit dose dispensing. 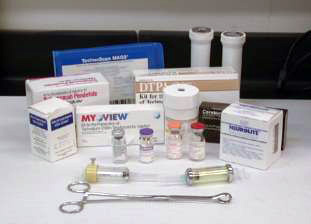 Since nuclear pharmacy practice involves the on-site compounding of most of the products being dispensed, each product that is compounded in the nuclear pharmacy must be tested prior to dispensing any individual doses.  Simple instant thin layer chromatography tests quickly and accurately provide information on the radiochemical composition of the kit that was prepared.  When the radiochemical purity of the compounded product is verified, it can be dispensed for use in patients. 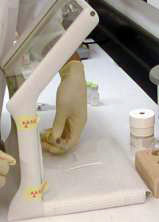 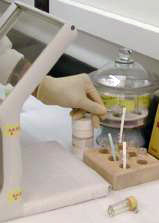 Most radiopharmaceutical doses are delivered to the end user in unit dose syringe form.  This makes it easy for the nuclear medicine department to order the necessary doses, keep track of deliveries, administer the product ot the patient and minimize radioactive waste.  In a nuclear pharmacy, unit doses must be drawn from the prepared radiopharmaceutical kit for delivery to the nuclear medicine department.  Again, leaded glass syringe shields and other tools help decrease the radiation exposure to the nuclear pharmacist. 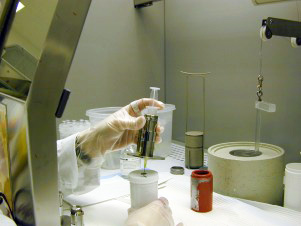 In addition to preparing and dispensing the radioactive products, nuclear pharmacists are available to provide drug information to other health professionals, to aid the nuclear medicine staff in the selection of products, and to assist in the interpretation of unusual studies.  Nuclear pharmacists receive extensive training on the various radiopharmaceuticals that are used, as well as training on the safe handling of radioactive materials and the procedures that will minimize radiation exposure to themselves and to others.  There are very few schools of pharmacy that have any courses in nuclear pharmacy - Purdue University is unique in that it has several undergraduate courses available to students enrolled in the school of pharmacy, as well as a continuing education certificate program which allows licensed pharmacists who have had no exposure to nuclear pharmacy the opportunity to receive the necessary training to become a nuclear pharmacist.